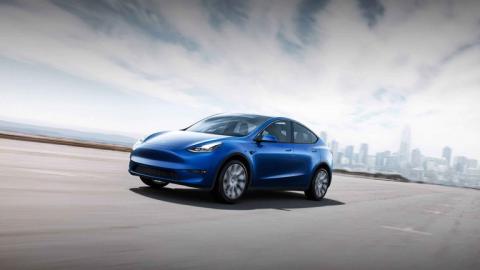 Musk’s tweet of him dancing was viewed 2.5 million times.

Why was he dancing?

Shanghai is now the home of Tesla’s first cars built outside the United States and delivered to the public.

It has reportedly had an enormous impact on Shanghai’s economy:

Tesla has delivered the cars in just 357 days – a record for global automakers in China.

The first 10 customers received their China-made Model 3 sedans this week, with Musk predicting “ultimately Tesla Model Y will have more demand than probably all the other cars of Tesla combined.”

That’s certainly worth a shimmy and a shake.

Tesla shareholders were happy. In fact shares in the company are already up 10% this year, trading close to their record high.

Part of the rise can be attributed to the company exceeding Wall Street estimates for vehicle deliveries in its fourth quarter.

Production capacity is currently 150,000 Model 3 sedans. Tesla aims to increase that to 250,000 vehicles a year. This includes Tesla’s Model Y in the Shanghai plant’s first phase.

Shanghai Vice Mayor Wu Qing said he hoped to see Tesla extend its cooperation with the city and for the car maker to manufacture more models at its Chinese plant.

It’s not all about Tesla

Sony unveiled its first concept car, the Vision-S, which the Japanese electronics-maker debuted at CES 2020 in Las Vegas.

BMW will release the i4 electric saloon that will produce 523bhp. This will rival the Tesla Model 3, with a top speed of around 201kph.

The new model is due to go into production in 2021 and will be BMW’s first electric saloon.

Interestingly, whilst BMW looks to compete with Tesla, through its billion dollar mobility ride-hailing app joint-venture with Daimler known as Free Now, it is ordering 60 Tesla vehicles in order to expand the JVs electric vehicle offering in Germany.

It seems if you can’t beat ’em or at least keep up with ’em, join them.